Harmoniums are reed instruments played by pumping air through a bellows. The quality of the sound of each instrument is mainly affected by the quality of the wood used, the number of reed banks, and the adeptness of the artist in his or her playing skills.

When selecting a harmonium to purchase, it is wise to consider which features you actually need and make your selection accordingly. Some features sound nice, but in actual use, you might not ever need or use them.

Harmoniums are classified by their features. The main features are:

The quality of the wood affects the resulting sound. Some of the priciest harmoniums are constructed with hard woods, such as teak or mahogany, which give them a very resonant sound. However, it makes them very heavy to carry around. Harmoniums made from lighter woods, such as pine or fir, are easier to carry, so this should be a consideration when you are choosing an instrument. If you think you will be carrying your harmonium around a lot, or if you plan to travel with it, you probably want a lighter model, unless you have good body strength. 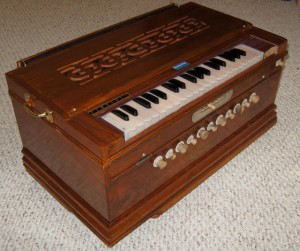 Standard harmonium models usually have two handles on their sides. They are the classical model and probably most common world-wide. 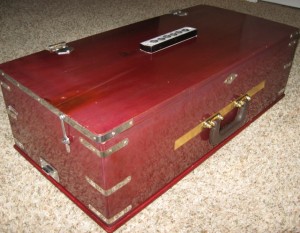 Some harmoniums fold up, which is a feature that makes the instrument easier to transport. There are two basic types of folding models, one type folds up into itself and the bellows board covers the top. An example is made by the Bina brand.  These are a bit tricky to fold and unfold, but if you get used to them and you are traveling with your instrument, might be well worth it to have. This is the style of harmonium that kirtan singers such as Krishnadas and Jai Utthal use. 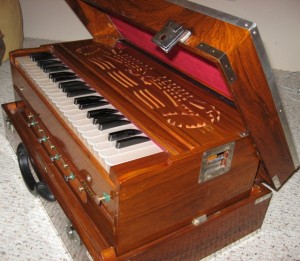 The other style folds into itself and a separate lid covers the whole instrument. It is called a suitcase model. These are much easier to fold and unfold, and the detachable cover can be used as a stand to raise the instrument to a better playing height.  However, they are often much pricier as they are most often found on harmoniums that are constructed out of heavier wood. And even though they are easier to fold up, they are heavier to carry if they are made with heavier wood.

Number and Type of Reed Banks

The sound of the harmonium is affected by the number of reed banks it has. There are harmoniums with 1, 2, 3, or 4 banks of reeds. Usually each bank has a different sounding set of reeds, most commonly called male, female, bass or tenor. Most often, different reeds are  placed in each of the reed banks and the mix of sound from them helps create each harmonium’s unique sound.

A greater number of reed banks contributes to the complexity of the overall sound, but more reed banks also means a heavier instrument. More reed banks usually means a wider reach to the bellows when playing a harmonium. Two- or even three-reed bank harmoniums usually have an acceptable reach. Four-reed bank harmoniums can sometimes be a bit wide for some folks to comfortably pump. If you have shorter arms, you might want to consider the depth of the harmonium and its reach before purchase. 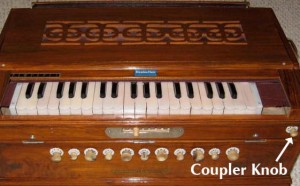 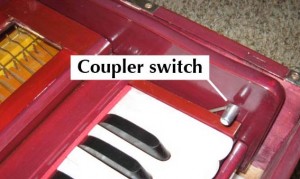 Some harmoniums have a coupler, a device that connects one key with its higher or lower corresponding key. When the coupler is engaged, it will play two octaves of the same note at the same time. This has advantages and disadvantages. The advantage is that it can make a harmonium that has a lesser number of reed banks sound like it has more, usually giving a richer sound. The disadvantage is that you will need to pump more air into the instrument to maintain the sound, so you will work harder pumping.

On the front of the harmonium is usually a series of larger knobs that allow air into the respective air chamber(s). These are called stops. These allow you to play one or all of the sets of reeds and control the amount of air (volume) to each set of reeds.

Some models have smaller knobs in the front that work the drones. A drone is a fixed note that sounds when you pull the knob to its open position. Most drones are in C#, D#, F#, G#, A#, or a selection of those. It is possible to customize the notes to your preference. 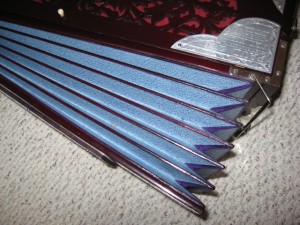 Air is pumped into the harmonium with the bellows. There are actually two sets of bellows, one that you can see and one that is internal. The external bellows can have 1, 3, 5, or 7 folds. Some people say that seven folds allow greater control of the instrument, but I have found that learning proper pumping technique is much more important than the number of folds in your bellows.

Bellows can open to the side or the top, and which type you have is a matter of preference. Many, but not all, of the top opening bellows have tighter bellows springs and require a bit more muscle to pump, but ensure that the internal bellows has lots of air. Many side-pumping bellows have a softer pumping action and can also ensure plenty of air for the instrument. If you find a harmonium that you love but has a stiffer pumping action than you like, an experienced harmonium repair person can usually change the bellows spring to have a softer touch to your liking. 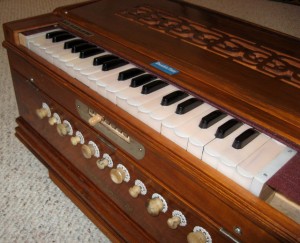 Harmoniums are made with differing sized keyboards, which means that the number of octaves varies from model to model.  There can be anywhere form 2.5 – 3.5 (or even more) octaves covered on a model. I have found that even the models with the shorter keyboards with 2.5 octaves, provide plenty of notes for common use. More is not necessarily better because most harmonium players will never use all of the keys on 3.5 octave model. Most models have about 3 – 3.25 octaves. 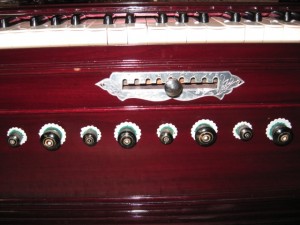 Some harmoniums have what is called a key changer, or scale changer.  This is a complex mechanism that allows you to shift the keyboard to the left or the right. This is a feature that many harmonium players will never use. It is only helpful if you have learned a chant or song in one key and you need to play it in a different one and don’t know how, or don’t have the time, to learn to play it in another key.

Scale changers make a harmonium much more delicate for shipping or transporting on an airplane, so you probably don’t want one if you plan on traveling with it or shipping it often. A scale changer adds to the price of a harmonium and it is important to consider whether you would even use it.